World According to Scripts Print

World According to (WAT) scripts enable you to auto-generate diagrams and are provided as part of the standard ABACUS installation. Each script works alongside a template diagram to query the model and create diagrams from existing content.

By default, the scripts work with the Avolution Framework, however you can customize them to work with your own Avolution framework implementation, or other frameworks.

The most recent version is available for download here, and in the folder C:\Program Files (x86)\Avolution\ABACUS\Scripts. The script is included under Manage Scripts in the Avolution Framework, but may be outdated. You should reload the script to ensure that you are using the latest version.

To learn how to modify the scripts and their corresponding template diagrams, check out the following guidance.

*This script can also be used with older versions of ABACUS

The scripts create a diagram for each component of the main component type unless restrictions apply.

The World According To (Application) script creates a diagram for each component of the type “Application.” An example of one of the generated diagrams is below. In this example, the “CRM” application is the main component. 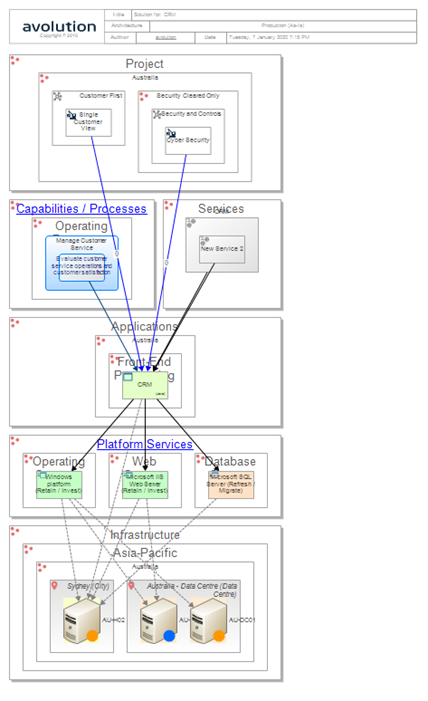 Figure 1.0 Shows a completed WAT diagram on CRM using the Word According to (Application) Script

Modifying the World According to Scripts

Modifying a World According to script comprises the following key steps:

You might want to show server components in the World According to (Application) diagrams. However, in this scenario, servers have different path hierarchies as shown in Figure 3

TIPWhen altering or assembling a diagram template the recommended best practice is to find the appropriate components in the tree and drag them onto the diagram, as shown in Figure 1.2.

Figure 1.2 Explorer tree view showing how to drag a selected component onto the diagram

Having assembled or modified the diagram template to your requirements, the next step is to modify the key constants for the selected script(s).

The constants to modify are:

To modify the required constants, work through the following steps:

Inside the string “” enter the name of the architecture to run the script.

NOTE: Each diagram query’s starting point is the main component.

Inside the string “” enter the template diagram name for the script to reference to generate the diagrams.

Figure 2.0 shows the script constant declarations. Amend the constants listed above to customize.

Having defined the Key Constants, the next step is to update the property name, type, and value. These constants are used to add an ID property to created diagrams, to identify that the script was auto-generated. The scripts use the ID properties to locate the diagram to edit when the script is re-run.

NOTE: When using the default scripts as the starting point for more Diagram types, make sure each diagram type has a distinct Property ID.

The constant to modify is:

To modify the required constants, work through the following steps:

Figure 3.0 Shows the public constants to set the property name, type, and value

(optional) Deleting diagrams if the main component no longer exists

To do this, set the following Boolean constant as TRUE

You can also modify the script to ask for confirmation before deleting the diagram. To do this, set the following Boolean constant as TRUE.  This is not recommended if the script will be scheduled to run.

IMPORTANT: The prompts above are not recommended if the script will be scheduled to run.

The next step is to identify the Component types and their placement in the diagram set.

Components are listed and ordered by diagram layer as illustrated in the following diagrams.

NOTE: the colored brackets show how script lines correspond to each layer in the template diagram.

4.0 Shows a list of Parent Components and related sub-components to be shown on the template diagram. 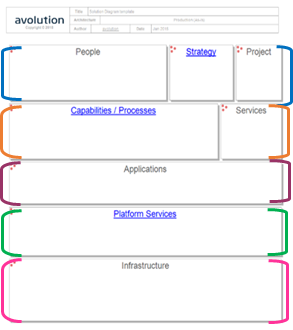 4.1 Shows the displayed the components, as listed in the scrip, on the template diagram.

To identify and order the required component types, work through the following steps:

IMPORTANT: Configured component type names will not always match the names of the  eventual parent components displayed on the diagram.

NOTE: Component types assigned to the same layer must be separated by commas rather than adding a new .Add function as shown below:

NOTE: Component types appearing on a separate layer must be added to the script using a new .Add method, as shown below:

The last step is to add a line of code for each connection you want the diagram to traverse.

To do this, work through the following steps:

IMPORTANT: Connections are traversed in the declared order. If a connection is dependent on another, then it should follow it in order.

If set to FALSE it adds connections and corresponding components even when both elements are queried components and not attached to the main component. Note that this option will be available in the script version provided with ABACUS 8.0.2 and above.

NOTE: In the example shown in figure 5.0, line 126 discovers the processes related to Applications (the main component type is this instance) which enables you to add line 128 to determine the relationships between processes and other components in the diagram.

To filter generated diagrams by property type, name and value, work through the following steps:

This informs the script to filter on the property Information | Environment

NOTE: If the value string property is blank “” then no filter is applied.

TIP: To only create diagrams above a given component threshold amend the following constant, replace 0 with the required threshold.

TIP: To prompt users to select which components of the main component type to create diagrams for, amend the following constant to TRUE.

Once the template diagram is set up and the script has been updated, Run the Script. You can also Schedule it to run in the Analytics Engine.

Did you find it helpful? Yes No

Send feedback
Sorry we couldn't be helpful. Help us improve this article with your feedback.